Last month we found ourselves having one of those lazy days. T was stretched out on the couch. I was nestled all cozy on the chaise. The soothing sounds of the air conditioner surrounded us. The curtains were drawn. It was peaceful. Over an hour slipped away just like that when I finally forced myself to look up and away from Pinterest only to find my son also transfixed by his phone.

“We should really do something. Get outside or something.” I suggested.

“Nah.” He said never looking away from his phone. “I’m good.”

“Summer will be over before we know it.” I reminded him. “What we need is an adventure. Something awesome. Something that we will both remember.”

His phone was lowered. Eye contact! Success was within my grasp.

“What do you say, we climb a mountain?”

And it was on. Bears have been fierce and abundant this year and my husband prefers we don’t hike alone. So, we checked online and searched for a guided tour. We discovered Roan Mountain was offering just that in only an hour. The race was on. We changed into shorts and sneakers. We grabbed backpacks, first aid kits, water, snacks and sweatshirts and were off. We ignored the chance of rain showers the radio reported and silently prayed for clear skies.

When we arrived we met out guide. Her name was Amanda and she was wonderful. I inquired if she thought T would be able to handle a 5-mile hike this strenuous and she told me she was confident he could it. I should have inquired about my own ability but little did I know.  Five miles is one thing, but five miles up a mountain. Well, that’s a different sort of challenge. It does however, offer such rewards 🙂 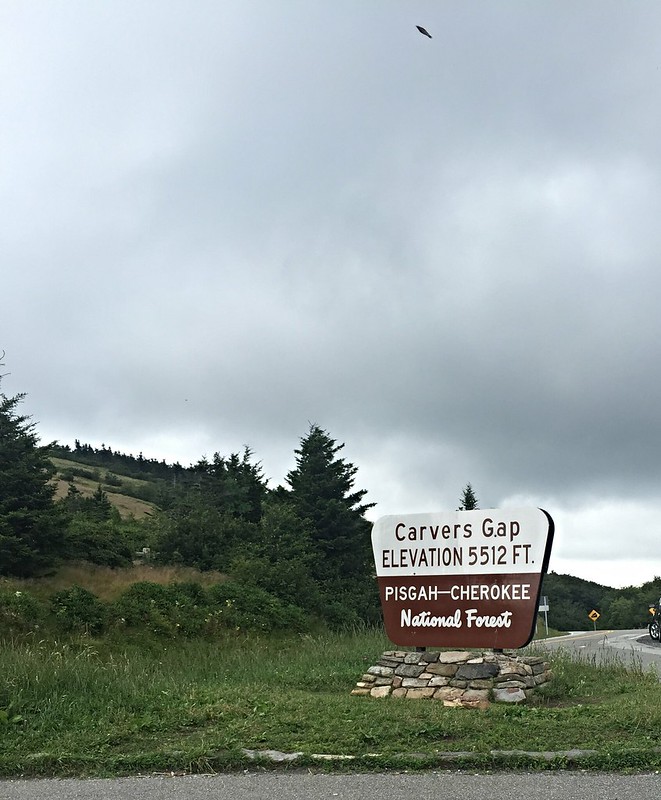 We drove to Carter’s Gap and started our hike in what looked like a scene out of a children’s story. Before us lay a forest of barren trees. Their trunks were as black as ink. The ground beneath our feet glittered with Mica deposits. It was an enchanting scene. 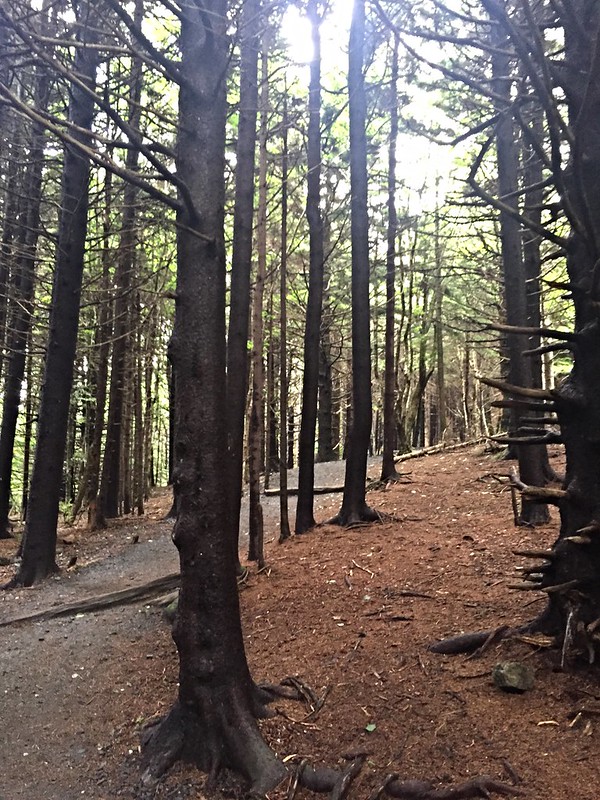 As we moved on we discovered this turtle shaped rock. We also noticed a little tree growing right out of its back. We called it, The Little Tree That Could. 🙂 We learned about a species of Tarantula that lives only here. It’s called the Spruce Fir Moss Tarantula and fortunately, it’s the smallest one there is. It is an endangered species. Learn about him here. 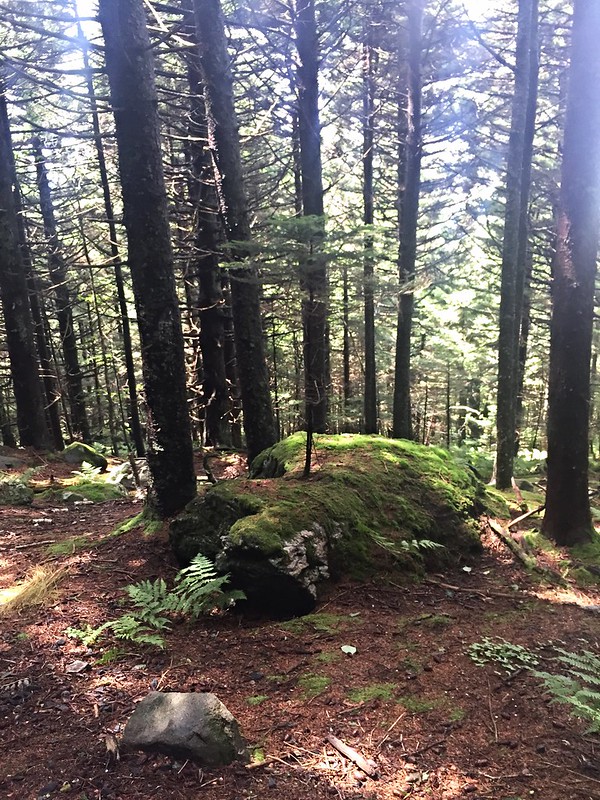 We continued through fields of rolling grass. Here is a shot of the reason they call it Roan Mountain. The predominant color here is Roan. Some say the mountain is named after David Crockett’s roan horse but around here, some say everything has some connection to David so you never know… 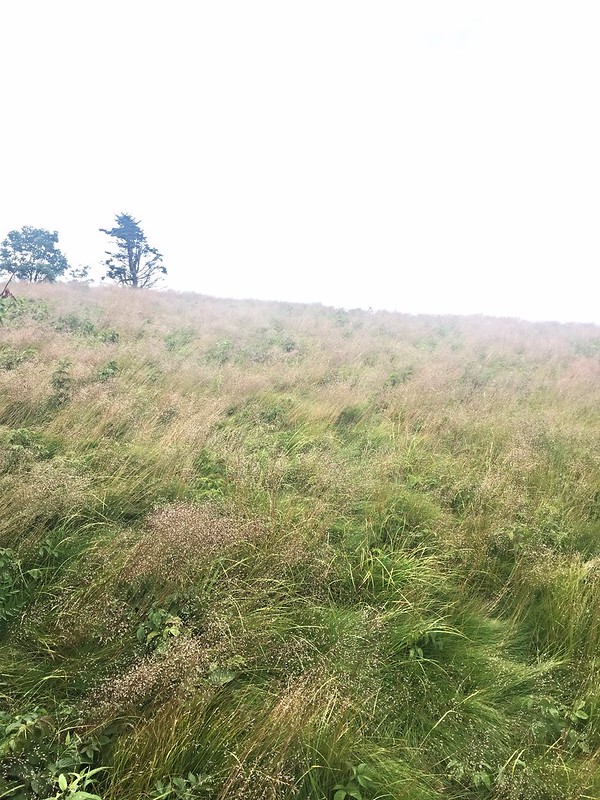 We encountered all kinds of plants. Perhaps the most interesting was this Angelica. Check out all the visitors it has. It turns out the pollen has fermented so each bloom is like a local brewery. The most delicious were the blueberries! 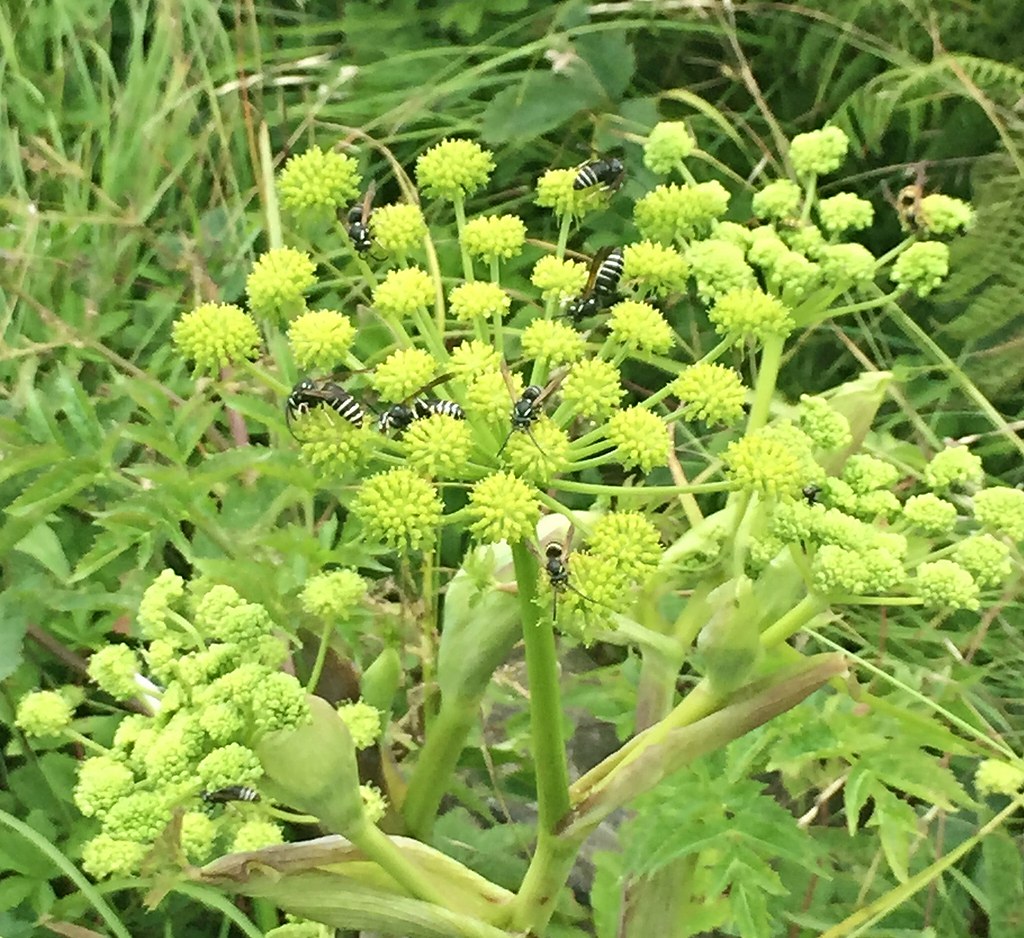 The rarest were these cool little plants T noticed that you won’t find anywhere else, except up in Canada. 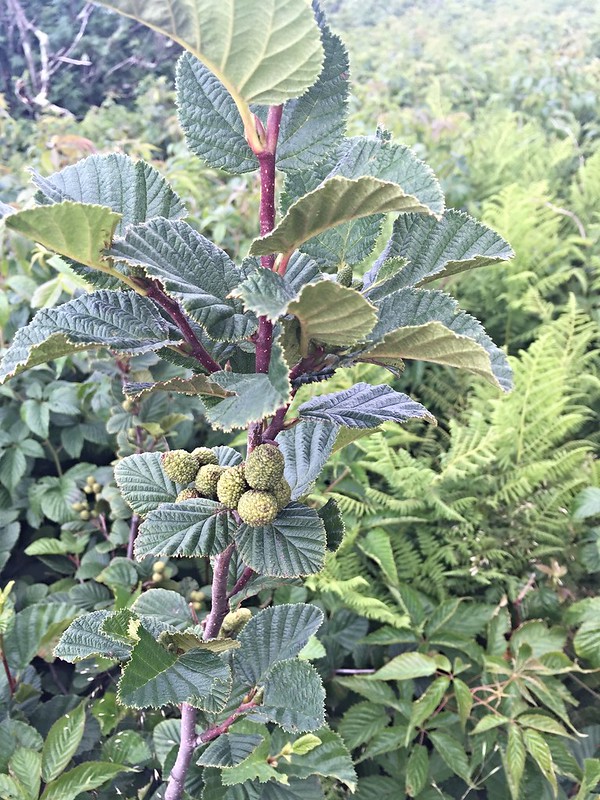 As the day went on, the rigors of the hike started to make themselves known to my ham strings. But, seeing how awesome T was being about the whole thing, I dared not utter a word. I can’t tell you how happy I was to hear we were going to stop and check out these goats! These goats were introduced to stop the spread of what I think were either a raspberry or blackberry plant that was threatening to take over the vegetation on Roan Mountain. The Forestry Service had been trying to control it but their efforts were not effective enough. The clever solution, these fellows and their adorable yet capable protectors, two Great Pyrenees herding dogs. 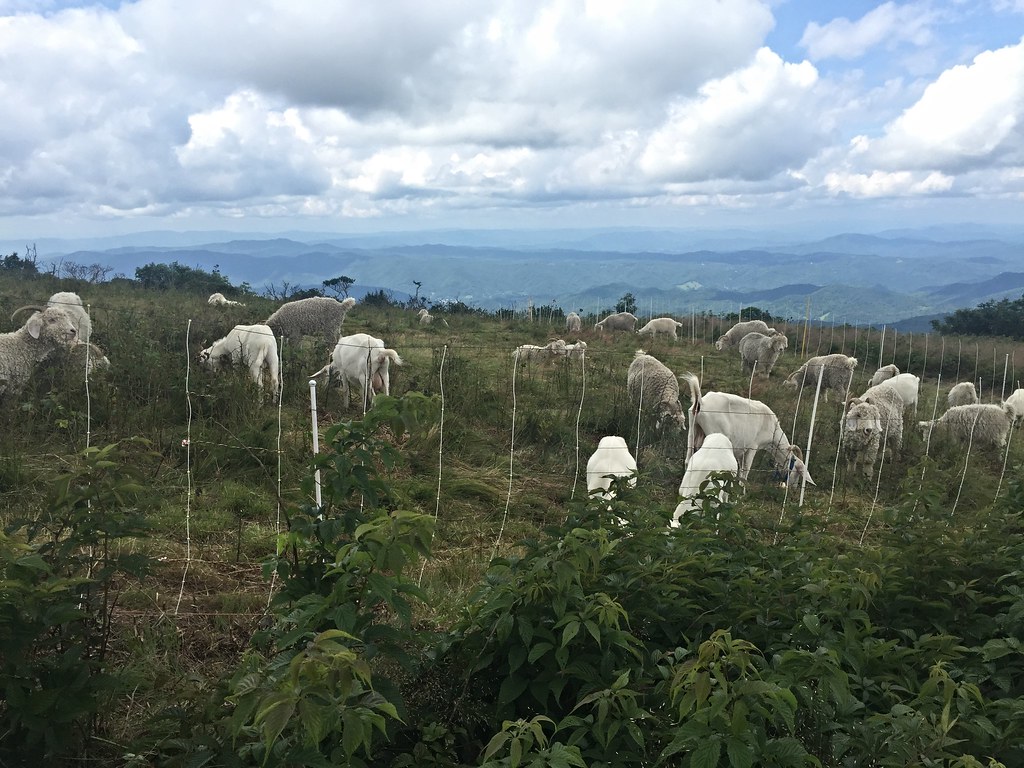 Restored after our time with the goats we decided to move on. The clouds continued to threaten but not a drop of rain had fallen. Around us the Mountains were breathtaking. We were surrounded by an ocean of mountains, one peak behind the next. It was beautiful. I had to read Cold Mountain in college and here it was being pointed out by our guide. It was amazing. 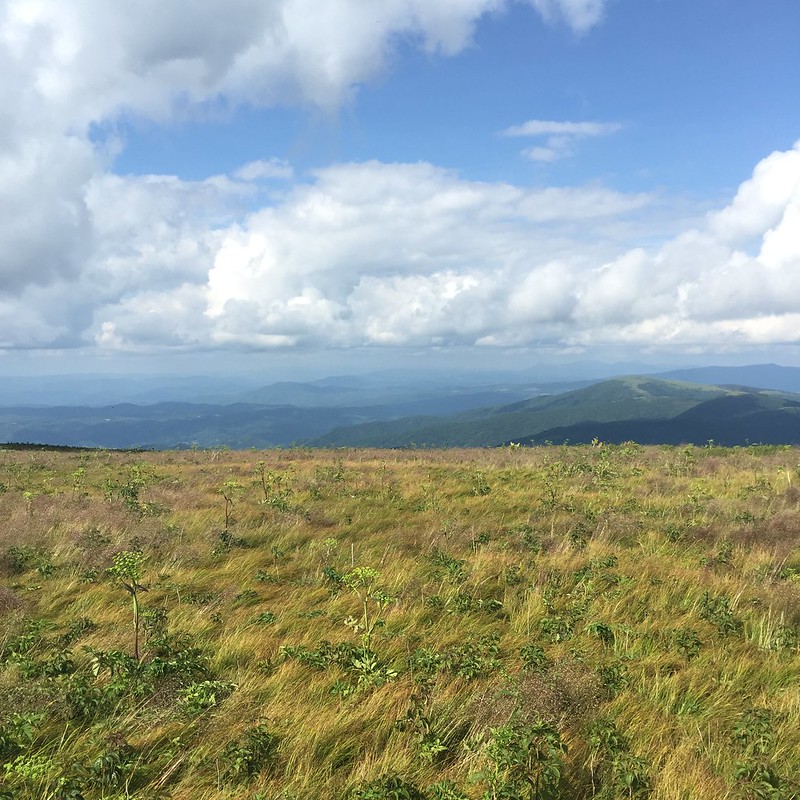 We went all the way and learned we were the first group our guide had all summer that made it to the peak. It was such sweet victory. We had created a moment. As we sat on a rock, me panting a little bit, we discussed what we had seen, what we had learned and how amazing it was to be so high up. 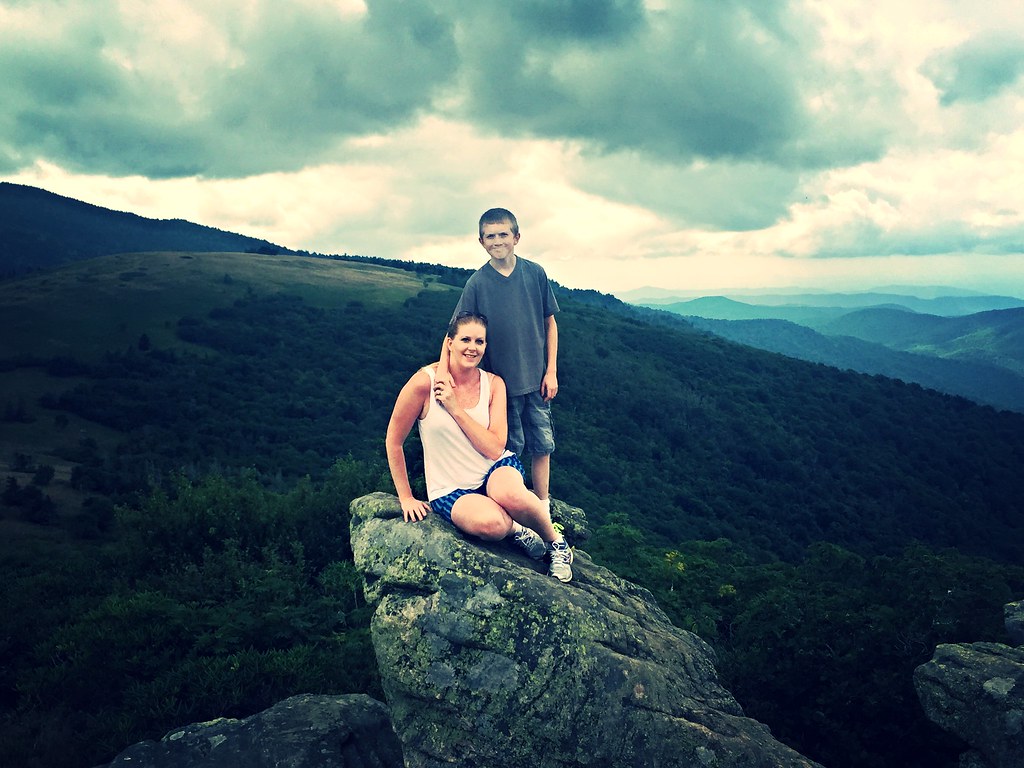 We had learned a lot. We felt blessed to live in East Tennessee. We have stood surrounded by God’s finest work, untouched here by human hands, and we have been moved by the glory of it. It was in fact, a day we would always remember. A place where the details will stay well formed in our memories. Where images of it will rise when we hear words like mountains, beauty, roan, family, magnificence. 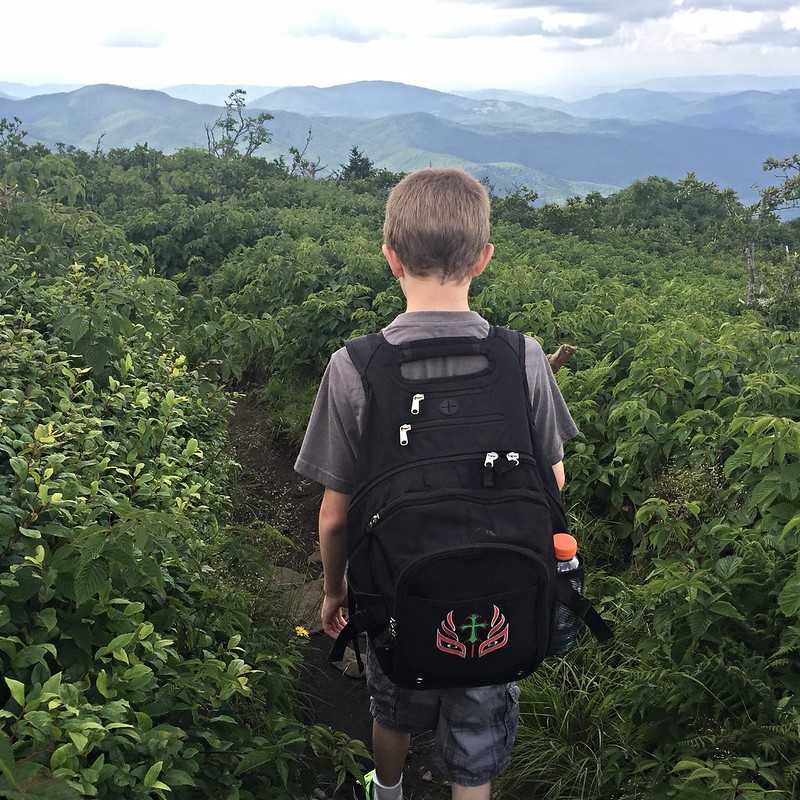 When at last we made it down to the bottom and buckled our seat belts, the clouds broke. The rain fell hard and heavy and we were glad it had waited. We recognized an answered prayer. We headed down the mountain and as soon as cell service was restored we used those phones for what they were intended for. Not surfing the web and wasting our lives away but ordering pizza. We were starved. The next few days all the stairs I encountered mocked me. My legs were sore but my spirit was light. It’s wonderful to know that beauty like that is actually all around us. As for this world, it has so much to teach us, to show us, if we are just willing to jump up from the couch 🙂